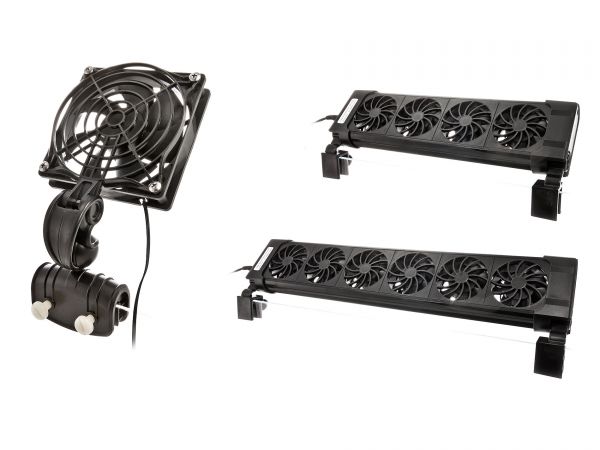 Especially in midsummer or even with very intense lighting, it can quickly lead to rising water temperatures in an aquarium. Shrimps or invertebrates are generally affected here, which can get problems quickly at water temperatures of more than 28/29 ° C. The BOYU Cooling fan - Aquarium fan provides fast, uncomplicated remedy.

The Cooling Fans - Aquarium fans of BOYU spare you and especially the aquarium inhabitants a frequent change of water with cold water, or even the sometimes practiced ice cube cure in the aquarium. Also, the Aquarium fans from Boyu are a cheap alternative to the very expensive through-flow coolers.

The BOYU Cooling Fans are powerful, very quiet and easy to assemble. The Cooling fan / Aquarium fan is simply attached to the pelvic edge and can be adjusted by a joint as desired in the inclination. So you can direct the flow of air and use it where it is needed.

Optimally adjusted, the Cooling fan blows a stream of air over the water surface and cools the aquarium water by evaporation.
Of course, you can also use the fan for other purposes flexible such. Cooling equipment.

The BOYU Cooling Fans - Aquarium fans are available in 3 variants with up to 6 individual fans.