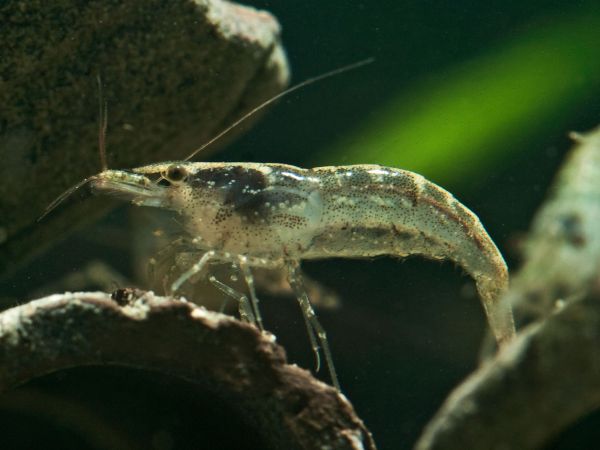 This almost colorless / transparent Algae Shrimp Neocaridina davidi (formerly heteropoda) is rather inconspicuous, but often with a fine pattern on the body. Perfect for those who do not want to be so colorful, but still do not want to miss the benefits of shrimp as algae eaters and remainders. Like almost all Neocaridina species, the Algae Shrimp are usually fairly easy to maintain and reproduce. In nature, Neocaridina dwarf shrimp occur in small streams, ponds and adjacent, flooded grass and reed beds in China, Taiwan and Korea.

The body color of the Algae Shrimp is transparent and colorless, whereby there is often a beautiful pattern with or without a stripe on it's back, depending on the shrimp. As with almost all types of shrimp, the females of the Algae Shrimp are a bit larger and usually have the nicer body pattern. In contrast to Amano Shrimps, the Algae Shrimps stay with max. 3 cm smaller and therefore suitable for smaller nano aquariums.

The Algae Shrimp (Neocaridina davidi (was: heteropoda), like most freshwater shrimp, is an absolute omnivore and will eat just about any food. The species is very peaceful and undemanding, other aquarium inhabitants have nothing to fear from them. You can easily keep the Algae Shrimp together with fish that do not predate on shrimp.

The Algae Shrimp do not have any special requirements regarding the aquarium decoration ... here you can use your imagination freely. The Algae Shrimp are happy with a little moss and driftwood ... and if there are some hiding-places like tubes or brown autumn leaves (oak or beech) in the tank, your Blue Dream shrimp will have everything the Algae Shrimp need.

When Algae Shrimp have acclimatized into the Aquarium and feel well, the female releases about every 5 to 6 weeks up to 30 almost fully developed pups, of which in a well-planted pool (hiding places), even with fish stock always get through several pups. Initially barely discernible due to the transparent coloration, they grow rather quickly with appropriate food supply or feeding and vigorously graze the whole aquarium with the adult Algae Shrimp.

Note
Our practical experience has shown that this number of surviving Algae Shrimp offspring is only realistic under the most optimal conditions. Usually, the shrimp will get berried every two to three months or so, and not all offspring will reach adulthood. Overpopulated Algae Shrimp tanks are thus not really a problem.