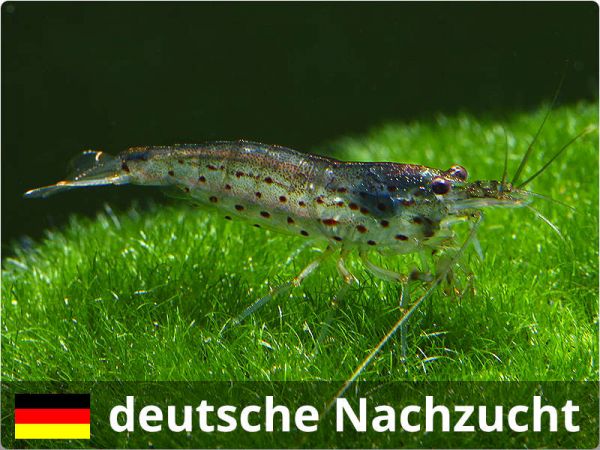 The Amano shrimps (here from German offspring) are one of the most efficient algae-eating shrimp there is. The Amano shrimp is an omnivore, and can reach an age of over 8 years. The females of the Amano shrimps grow to a body length of 6 cm, the males stay somewhat smaller. When they do not get lots of shrimp food, no algae will escape their ravenous appetite …

Amano shrimp from German offspring!
Our Amano shrimps offered here come from German offspring, using 100% green electricity. This avoids long transport routes halfway around the world, delivery times are significantly reduced, thus reducing stress for the animals and, above all, protecting the wild stocks of Amano shrimp in their natural habitats in Japan and Taiwan. We also operate our shrimp house with 100% green electricity, so the animals are bred and kept with renewable energy in terms of electricity consumption up to packaging for you. In this way we can save a lot of CO2 together with you.

Amano shrimp are quite agile, curious and peaceful, and will soon lose their fear of the hands of their keeper. Amano shrimps do not fight amongst each other, and other shrimp species as well as fish have nothing to fear from them. Only when they are severely underfed with protein (due to a very uniform diet) Amano shrimps might turn to weak shrimp (for example, after a moult), however, this is an exemption, not normal behaviour.

The females of the Amano shrimps release up to 2,000 (!) larvae in freshwater, which need marine to brackish water to grow up. The tiny, free-floating larvae will survive for only three days in freshwater, then they die off, or they are sucked into the filter. Breeding Amano shrimp takes a lot of time and dedication, but it is really rewarding.

Amano shrimp do not have any special requirements regarding the aquarium decoration. Due to their size of up to a good 6 cm Amano shrimp should not be kept in tanks under 40/50 litres. If they do not have enough room to move and the tank has no lid they might try to escape. Some structure in the form of driftwood, rocks or plants is all Amano shrimps need. Keeping Amano shrimps together with fish that do not predate on them is entirely unproblematic.

Note to this article

Do something good by buying our German-bred Amano Shrimp!
The breeder now has a permanent partnership with the organization "Trees for the Future" (www.trees.org) and has trees planted by selling his shrimp. We support this and now pay a little more for his shrimp, so a tree is planted for every 5 shrimp we buy from him. You can easily support this project by choosing these Amano shrimp. We bear the additional costs for the tree planting campaign, this does not change the price for you. So join us, every shrimp counts.