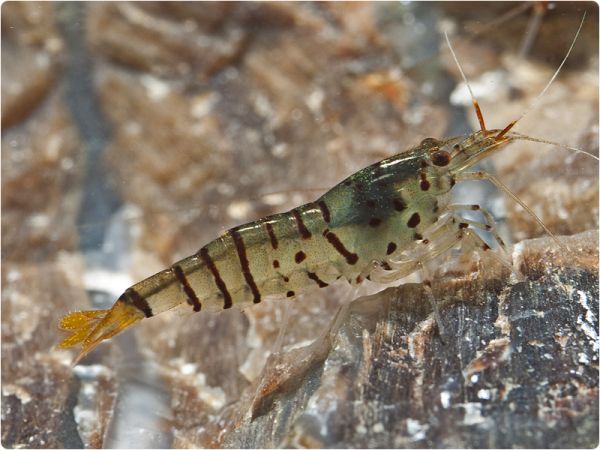 Sorry, the product is currently sold out!
We are working on, to get this item as soon as possible in stock again. Please check again soon.
beautiful spot and stripe pattern very friendly and grow up to 4 cm easy to keep and care suitable for aquariums from about 40 liters

The basic color of the Galaxy Tiger shrimp is transparent (sometimes blueish), and on the sides of its body there are brown to black dots and stripes. In some of these shrimp you'll notice tiny white pigment spots, and their tail fan often has a yellowish to orange color.

Like most dwarf shrimp, the Galaxy Tiger shrimp (Caridina spec.) is an omnivore and an absolutely peaceful species. Conspecifics and other aquarium inhabitants have nothing to fear from them. They can be kept together with small peaceful fish that do not eat shrimp.

Galaxy Tiger shrimp do not have any special requirements when it comes to the aquarium setup, you can decorate the tank as you please. They are happy with a little moss and some pieces of driftwood … and if you put in some hideouts like tubes, or brown leaves (oak or beech), your Galaxy Tigers will be absolutely happy.

When the Galaxy Tiger shrimp have acclimatized themselves to the tank and are well, the females will release between 20 and 40 almost fully developed young shrimp every five to six weeks. In a well-planted tank (hiding-spots), some of the offspring will even grow to adulthood if there are fish. In the beginning, the dots and stripes are hardly visible, they become more prominent when the shrimp grow older.
In our experience, the reproduction rate give above is reached when the conditions are nearly perfect. As a rule, you can count on a batch of shrimplets every 2-3 months, and not all of the young shrimp will survive and reach adulthood. It is rather improbable that the Galaxy Tigers overpopulate the tank after a short time.


Our tip for keeping Galaxy Tiger Shrimp!
Galaxy Tiger feel the happiest when the pH is between 6 and 7, a total hardness of 5 - 8° dGH (German hardness) and a carbonate hardness of 0 - 3° dKH (German hardness). The temperature should be between 18 and 22° C ... varied food (predominantly of vegetable origin, and frozen food fed sparingly) contributes to heathly, vital, happy shrimp.