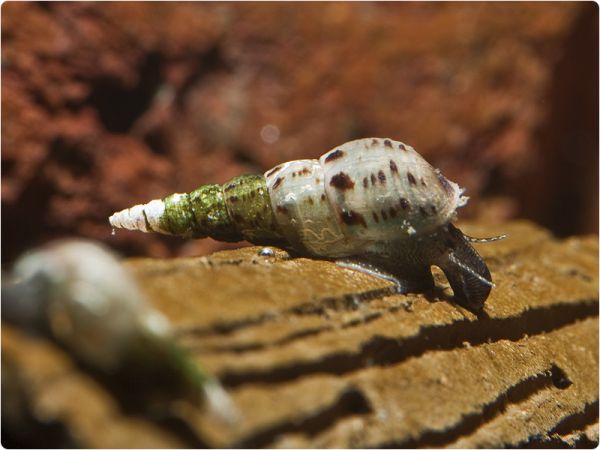 The rather undemanding Malayan Trumpet snail has a very large area of distribution, from Africa to Asia. It mainly lives inside the substrate, where it lives off food rests, muck and decomposing plant parts, but it will also gladly accept all kinds of tablet food.

As it constantly moves inside the substrate, the Trumpet snail prevents it from compacting, which in turn helps the plants grow better and reduces the risk of foul areas in the substrate.

The Malayan Trumpet snail grows to a maximum shell size of around 3 cm, its shell is usually beige/brown, spiralling, and has a pattern of darker dots and stripes. It prefers substrates with finer grain like sand or relatively fine-grained gravel.

The Malayan Trumpet snail is a livebearer and can reproduce in rather large numbers when it finds abundant food. As those snails usually dig inside the substrate during the day, they are not very obtrusive. It can be kept together with shrimp and fish that do not predate on snails. The Malayan Trumpet snail itself is absolutely harmless for all other aquarium inhabitants.

Size
We ship snails of a shell size of around 8 - 10 mm, as available.

Please note
Do not release the Malayan Trumpet snail in nature.
It will survive in a temperate climate and may outcrowd native snail species