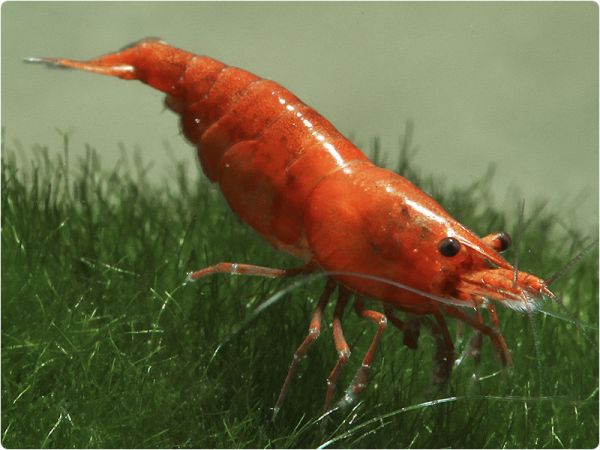 The Red Fire SAKURA dwarf shrimp is a highly intensive red color variant of the standard Red Fire (Cherry) dwarf shrimp. The males and even the young offspring are bright red, much better than - in comparison - ordinary Red Fire shrimp. In nature, Neocaridina shrimp are distributed in China, Taiwan and Korea in small streams, ponds and flooded grassland and reedy areas near those waters.

Their basic body color is an intensive, solid red, some shrimp, especially the females, have a pronounced light-colored back line. All in all, the females are of a better color quality than the males.

The Red Fire SAKURA dwarf shrimp (Neocaridina davidi (was: heteropoda) var. sakura), like most freshwater shrimp, is an omnivore and will eat just about any food. The species is very peaceful and undemanding, other aquarium inhabitants have nothing to fear from them. You can easily keep them together with fish that do not predate on shrimp.

Red Fire SAKURA shrimp do not have any special requirements regarding the aquarium decoration ... here you can use your imagination freely. The shrimp are happy with a little moss and driftwood ... and if there are some hiding-places like tubes or brown autumn leaves (oak or beech) in the tank, your Red Fire SAKURA shrimp will have everything they need.

When Red Fire SAKURA shrimp have adapted to their environment and when they are happy, the females will relase up to 30 almost fully developed shrimplets every 5 to 6 weeks. In well-planted tanks with lots of places to hide, some of the young shrimp will even grow up in the presence of fish. Even at first, the red color is visible, and it will intensify when the shrimp grows older. A small percentage of the offspring may be of a somewhat weaker color.
Our practical experience has shown that this number of surviving shrimp offspring is only realistic under the most optimal conditions. Usually, the shrimp will get berried every two to three months or so, and not all offspring will reach adulthood. Overpopulated Red Fire SAKURA shrimp tanks are thus not really a problem.


Our tip for keeping Red Fire SAKURA shrimp!
Red Fire SAKURA shrimp feel the happiest when the pH is between 7 and 7.5, a total hardness of 5 -10° dGH (German hardness) and a carbonate hardness of 2 - 6° dKH (German hardness). The temperature should be between 18 and 24° C ... varied food (predominantly of vegetable origin, and frozen food fed sparingly) contributes to heathly, vital, happy shrimp.