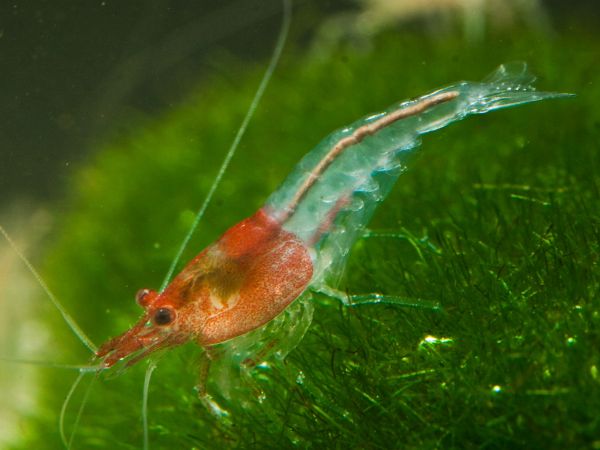 The Red Neck Shrimp (Neocaridina davidi var. red head) is a red colored in the head breeding form and was breed form of the regular Red Fire, or Red Rili Shrimp (back striped shrimp) with different degrees and (wanted) missing pigmentation on the abdomen , In nature, back striped shrimp in China, Taiwan and Korea occur in small streams, ponds and adjacent, flooded grass and reed beds..

The basic body color of the Red Neck Shrimp is transparent-milky with different pronounced intense red-colored head area. Overall, the coloration in the head of the Red Neck females is slightly more pronounced, as the males.

The Red Neck Shrimp (Neocaridina davidi (formerly heteropoda) var. red neck) is, like most other aquarium shrimp species, an absolute omnivore, a very peaceful and very uncomplicated species. Conspecifics and other aquarium dwellers have nothing to fear here. An attitude together with fish that do not adjust the Red Neck Shrimp, is easily possible.

If the Red Neck Shrimp have settled in and feel well, the female releases about every 5 to 6 weeks up to 30 fully developed kittens, of which in a well-planted pool (hiding places), even with fish stocking, still many young animals come through , Initially, the red color is hardly pronounced, but becomes more intense with age. A certain smaller percentage of the young animals falls in color but sometimes back slightly and shows less intense red, or shows in the abdomen in places again red games.
In practice it turns out that the propagation rate is rather a value under really optimal conditions and is usually more likely with a litter every 2 - 3 months, from which then not all young animals reach adulthood; an "overpopulation" is therefore usually unlikely

Write an evaluation
Ratings will be released after a short checking.
your last viewed items