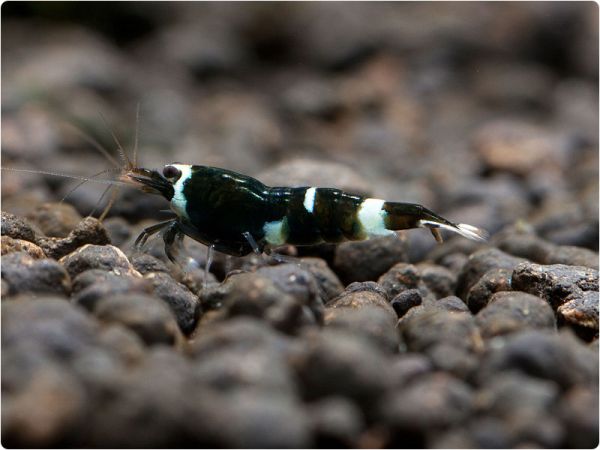 Black King Kong shrimp were first bred in Taiwan. They are probably one of the most popular dwarf shrimp variants right now, and they are frequently carried under the name Taiwan Bee or Shadow Bee. They are said to have first appeared in a strain of red and black Bee shrimp, however, this is just hearsay. The Black King Kong dwarf shrimp fascinates the enthusiast by its deep, intense, unbroken black colour and two very densely pigmented broad white bands, sometimes with a slight hue of blue.

They can be kept just like Bee Shrimp/Red Bees, as they have the same requirements:
water temperatures of 20 - 26 °C, a slightly acidic pH and a low carbonate hardness.

The Taiwan Bee - Black King Kong dwarf shrimp grows to a maximal body length of 2 cm and reaches an age of approximately two years. The males stay slightly smaller than the females and do not get as plump.

The Black King Kong shrimp is an omnivore and will eat just about any food. The species is very peaceful. You can easily keep them together with fish that do not predate on shrimp.
When these shrimp are happy with their environment, the females will release up to 25 almost fully developed shrimplets after carrying the eggs under their pleon for around 4 weeks.

Taiwan Bees do not have any special requirements regarding the aquarium decoration ... here you can use your imagination freely. The shrimp are happy with a little moss and driftwood ... and if there are some hiding-places like tubes or brown autumn leaves (oak or beech) in the tank, the Taiwan Bees will have everything they need.

Our tip for keeping Taiwan Bees!
Taiwan Bee shrimp feel the happiest when the pH is between 5.5 and 6.5, a total hardness of 5 - 6° dGH (German hardness) and a carbonate hardness of 0 - 1° dKH (German hardness). The temperature should be between 21 and 23° C ... varied food (predominantly of vegetable origin, and frozen food fed sparingly) contributes to heathly, vital, happy shrimp.

Wow it's exactly as the one in the picture. No editing.