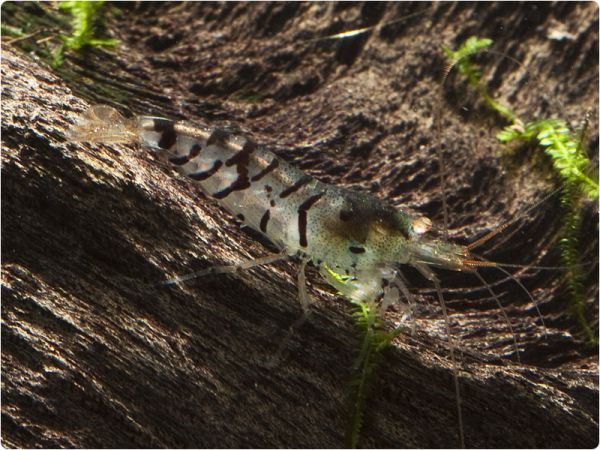 P on purchase receive bonus points now**
Description Evaluations 10
Description
Our Blue Tiger shrimp do not have all blue offspring, and we sell the culls for a lower price.... more
Close menu
GarnelenhausTiger shrimp 'Orange Eye'

The Tiger shrimp originates from South China. It can grow to a maximal body length of 3 cm and reach an age of around 2 years. The males stay slightly smaller than the females and do not get as plump. In nature, they are found in small streams and flooded grassland and reedy areas near those streams. Color and pattern may vary slightly, depending on the locaton the shrimp were originally collected.

Their basic body color is blueish-transparent, with the characteristic dark "tiger stripes" on the sides. Tiger shrimp "OE" (Orange Eye) always have light-colored eyes, the wild form is black-eyed. The tail fan is usually transparent, often it has tiny spots.

The Tiger shrimp "OE" (Caridina mariae "Tiger Orange Eye"), like most freshwater shrimp, is an omnivore and will eat just about any food. The species is very peaceful, other aquarium inhabitants have nothing to fear from them. You can easily keep them together with fish that do not predate on shrimp.

Tiger shrimp "OE" do not have any special requirements regarding the aquarium decoration ... here you can use your imagination freely. The shrimp are happy with a little moss and driftwood ... and if there are some hiding-places like tubes or brown autumn leaves (oak or beech) in the tank, your Tiger shrimp will have everything they need.

When Tiger shrimp have adapted to their environment and when they are happy, the females will relase up to 30 fully developed shrimplets every 5 to 6 weeks. In well-planted tanks with lots of places to hide, some of the young shrimp will even grow up in the presence of fish.
Our practical experience is that this number of surviving shrimp offspring is only realistic under the most optimal conditions. Usually, the shrimp will get berried every two to three months or so, and not all offspring will reach adulthood. Overpopulated Tiger shrimp tanks are thus not really a problem.


Our tip for keeping Tiger shrimp!
Tiger shrimp "OE" feel the happiest when the pH is between 6 and 7.5, a total hardness of 5 -12° dGH (German hardness) and a carbonate hardness of 0 - 8° dKH (German hardness). The temperature should be between 20 and 25° C ... varied food (predominantly of vegetable origin, and frozen food fed sparingly) contributes to heathly, vital, happy shrimp.