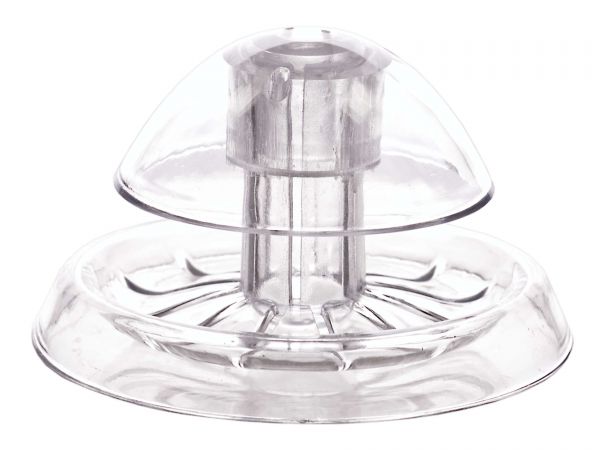 The GH-GOODS Snail Trap made of transparent plastic offers the possibility to fight unpleasant snails directly in the aquarium without chemicals and to reduce them considerably. The Snail Trap has a fixing line that can be fixed to the top of the aquarium glass with a small suction cup (both included in the scope of delivery), thus making it much easier to remove the Snail Trap from the aquarium.

As a rule, snails eat algae and greens, but they also do not disdain carrion. Depending on the type of snail, you may have to experiment a little with a bait, which is well suited and which attracts the snails more. Small pieces of cucumber, thawed frozen animal spinach, nettle leaves or various food tablets, for example, look good. After a certain time, the snails collect on the base of the snail trap and this can then be carefully pulled up with the help of the line to remove the snails from the aquarium.

Instructions for use
• remove the top cover
• equip the center column with an appropriate bait (e.g. vegetable cucumber or food tabs)
• put the lid back on and place it in the aquarium
• fix the safety line (attached to the holes in the top of the lid) to the edge of the pool using a suction cup

Cleaning
Depending on the bait used, rinse and clean the snail trap with tap water after use.
Attention! Never use washing-up liquid or similar for cleaning. Residues could harm the aquarium inhabitants.